Welcome, welcome! Set foot into the overblown world of Istanbul’s women, into the Altin Günü, the turkish term for “Golden Day”. The project sprawls out of existing domestic events through which a hostess on rotation receives a gold gift, usually a coin, by organising a gathering of friends at her home. By establishing archetypical spaces for each of the event’s stages, the domestic proceedings are exaggerated to an urban scale. Henceforth, a critique may be formed on Istanbul’s gated residential high-rises and their spatial relationship to wealth and power.

Networks for guests, hostesses and members of staff penetrate the city’s existing skyscrapers and trigger a mass-scale accumulation of wealth. The situation adds to the current strain on the Turkish government’s balance of payments deficit whereby an estimated 1.7 billion pounds worth of gold is being hoarded within turkish homes. As the boundaries between currency and reputation blur, a tower’s exterior is eroded by the alterations and expansions of individual properties; a bi-product of the proliferation of wealth and the need to display it’s power to the guests.

An innocent gift, a glamorous get-together and what seems like a legacy of empowered women are part of the superficial framework cloaking a darker side to this event. An unwanted and inevitable grid-lock will result from the friction between “more money = bigger house" versus “bigger event = more infrastructure to maintain it”. After all, “reputation is merely what others think you are” and not what truly lies beneath.

The 136x136cm, silk-satin, Hermes scarf incorporates the elements of an architectural score, through which the event and almost all its stages are explained. The score itself becomes a luxury object, sensual and opulent it reflects one of the projects most potent elements, that is the superficiality sugar-coating the world of these women.

Diagonal axis feature archetypical spaces designed for each of the event's stages, while these correlate with the proliferated objects lined up layer after layer, designated to each space. The Cross axis feature timelines, while the scarf's border the corresponding locations in the building plans and throughout the city maps.

As the patterns repeat over four seasons around the scarf, since the event itself is seasonal, one can trace the story of a guest (winter), hostess (spring), a hostess who also is part of the staff (summer) and a member of staff (autumn). The spaces they use as well as the objects they interact with are also highlighted.

A Study of the traditional Altin Gunu (Golden Day) event as it is today on the domestic scale. The timeline unfolds within an apartment depicting how the members of the community - hostesses, guests and staff - operate within the home. 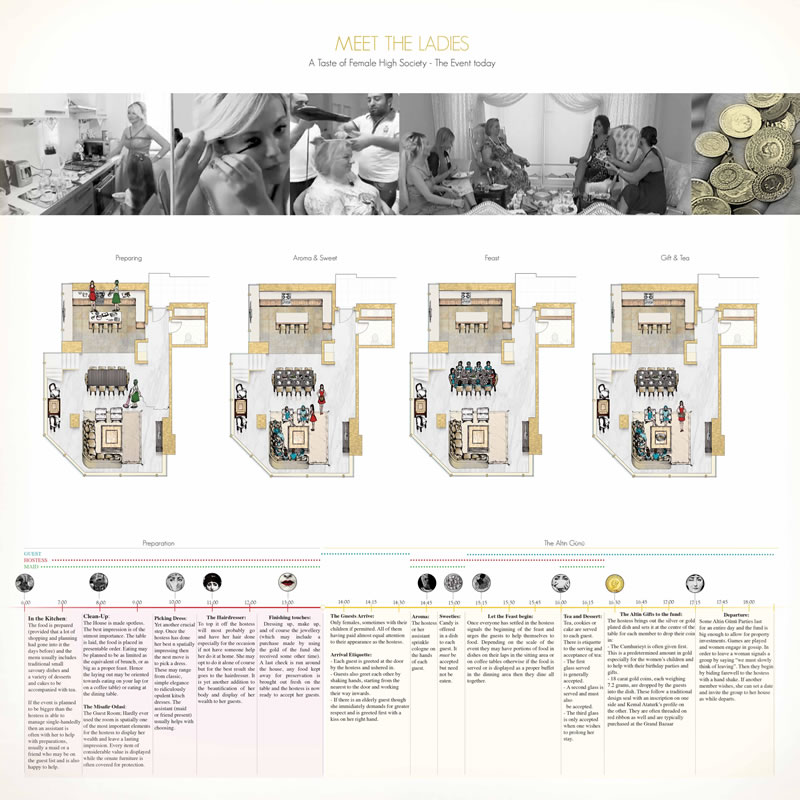 The site features existing towers, currently known as the Anthill Residence, in Istanbul's middle class Bomonti district. By activating the event networks within such an existing residential high-rise, the increase in wealth and the need to display it will encourage property expansion.

The women form a powerful elite whose properties alter the facade of the tower and begin a process or erosion. What must be seen is their advancement in wealth and status reflected upon their expanding residences which form the exoskeleton of the building.

The event networks are unfolded in section to unveil the procession of guests and hostesses through them.

These are three examples of the spaces designated for each stage of the event. During their preparation, hostesses beautify their bodies through their wellness centres and ensure they look their best to impress their expected guests.

The grand entrance, with its false perspective to further exaggerated the action of entry, ushers in the guests as they arrive at the foot of the tower.

The Acceptance stage features a layer of ramps extended over the Tower's surface. In order of wealth and status the hostesses display themselves on plinths which progressively become more spacious while their displays more elaborate. The guests ascend these ramps to be "accepted" or welcomed by their hostesses.

The Currency of Reputation

The event is very much concerned with forms of current, the least of which are financial. Gold evolves from simply being the traditional coin to cards through which the government struggles to monitor its flow within the economy.

Property itself emerges as an even more valuable currency, in a city where the daily influx of new inhabitants is far greater than the rate of living spaces constructed.

Space is not merely scarce it is also the indicator of power, wealth and status. Reputation will eventually become the dominant currency.

The impact of these evolving currencies, spawning out of the events, will become visible on both the exterior and interior spaces of the residential high-rises.

Read into these articles and peek into the spaces from HELLO! Magazine's special edition issue on Istanbul's Altin Gunu mega events.

The entire nature of the event aims at deception through its superficial, near naive, concept. The critique lies within the irony of it's impending doom. As the turkish women in control seem to be ever more powerful, rich and beautiful their events reach a paradox of inter-dependacy between what is displayed and what is hidden.

The "maintenance" , kept hidden, is eventually compelled to make do with the spatial leftovers from the expanding properties. One side of the event cannot grow without the other and yet it is precisely this friction that may lead to a dysfunctional standstill or indeed a self-destructive legacy.

The Tower becomes a cosmetic object, keeping up appearances for potential onlookers. Like the women it radiates a false sense of commercial luxury, of empowerment and a superficial fetish for beauty. The properties "on display" are lit while those shoved away within the tower remain dark.

POMP - The State Opening of Parliament brings politics, ritual, procession and hierarchy to a collective apotheosis of ridiculous and pompous spectacle. An annual build up for the Queen to simply read out her government's agenda.

POWER - La Toilette is the ultimate example tying politics, feminine power and domestic space in one. Countless hours and ceremony surround Madame de Pompadour as she beautifies herself for the King, all at the expense of the crown. A mistress who governs policy through sensuality.

ESCAPISM - With the Thames Frost Fairs, London was granted a unique opportunity during the mini ice age, which devastated Europe, to literally party and celebrate on the Thames. While the world around was being destabilised by the adverse conditions Londoners retreated to a superficial, ephemeral street created upon the Thames for them to have fun.