The project explores organizational elasticity and negotiable boundaries through the use of elastic materials and transformable spaces, set within an environment of rapid urbanization. It proposes the introduction of a variable volume that will activate the urban ecosystem and will introduce multiple ground levels in an ever changing urban environment.
Responding to the conditions of the city the project proposes an elevated, lightweight variable structure, almost an instrument to the incompleteness of the city, cannibalising part of the existing urban landscape. It acts as a reconfigurable pedestrian circulation device, which can provide with an escape from the heavily logistic streetscape and redefine it by extending it upwards. The movement is in response to crowd and sunlight conditions and in combination with the existing plinths of the high rises introduces multiple ground levels within the city. Through the use of feedback mechanisms this can become, apart from a negotiation between boundaries, a negotiation between body, movement and form, to the extent that movement and occupation become the design drivers for the space, resulting in an almost not designed environment of unexpected events, where the designer sets the rules and allows for things to happen.

A product of rapid urbanization, Chongqing has doubled its population in the past 10 years and it is still growing rapidly. It is a very dense, poorly planned, polluted city, suffering from lack of green and civic spaces, and severe environmental degradation. Its most interesting characteristic is its incompleteness and constant fluctuation. Buildings are being constantly torn down for taller ones to take their place. In many ways it is a Ballardian, post-apocalyptic cityscape dominated by high-rises and crowd congestion. A city that keeps growing upwards, detaching itself from the ground. Its planning and layout have been affected to a large extent by the irregular topography resulting in peculiar urban phenomena.

The project identifies ingredients of the emerging city - an unfinished project itself - which become its basis. The plinth, elevated infrastructure, crowd congestion, ever-changing nature and the exhausting occupation of the street by informal commerce and traffic

Initial abstract tensile studies in the form of a canopy and an enclosure, focusing on the production of space comprising of oblique surfaces and slopes.

This model combines all previous experimentation of enclosure, surface and motion, by using a double layered membrane, which delaminates and produces space internally, as it transforms and triggers different behaviours in the surrounding space. It makes the transition from space that does not exist (surface) to a space of varying volume and back. Ring beams function as occuli diffusing light to the ground when pulled upwards, and as entrances when they meet the ground

Part 3: Direction of Deforming Forces: Vertical and Diagonal
Part 4: Timeframe of the Loop and the City in Motion 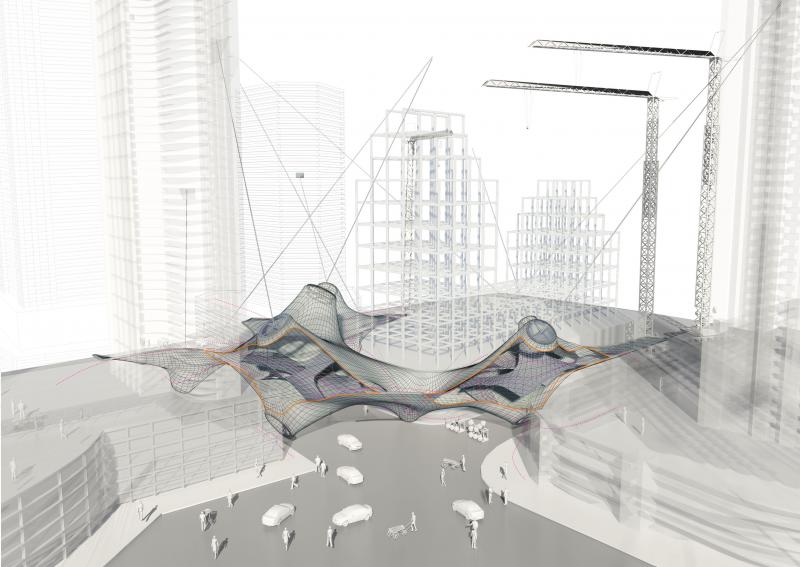