Denmark has no or very little natural resources. It is therefore of paramount importance that the country develops a socio-economic-political-urban system that is entirely self sufficient.

This drawing shows the current proposal for the redevelopment of the north harbor in Copenhagen. I have gridded the entire proposal to show that any city can be understood as a gridded city - I will now attempt to show that a city can be designed in a reverse way, from regularity of the grid to multiplicity and diversity, while benefiting from constraints that a grid system introduces. 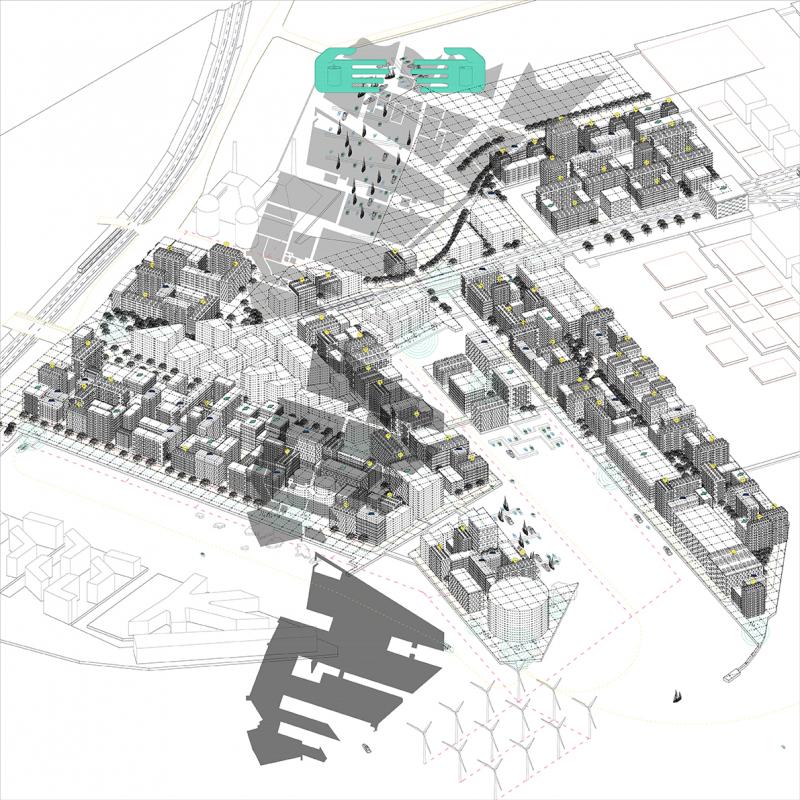 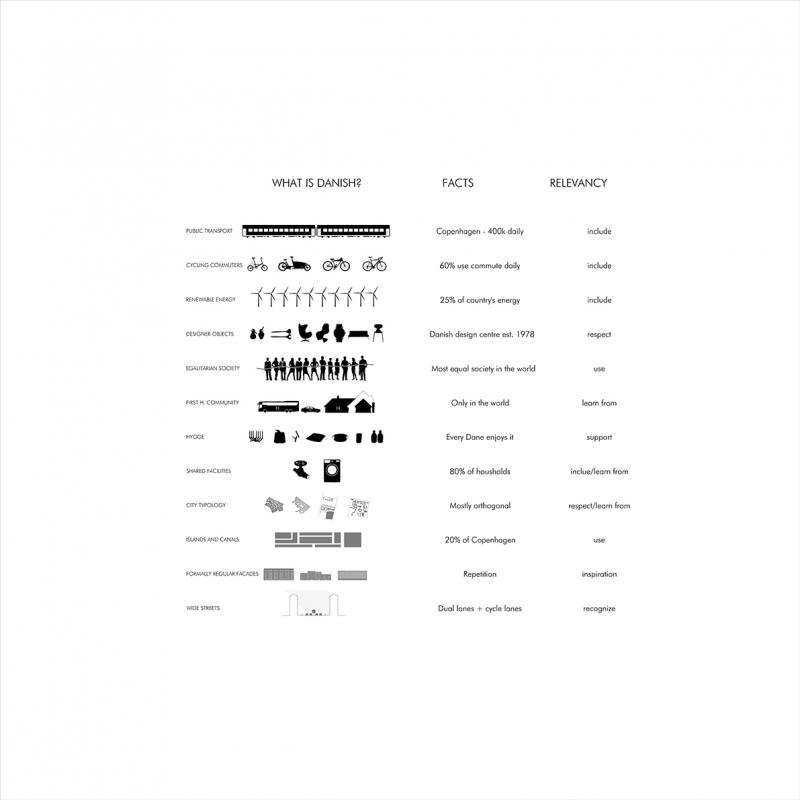 Different city scapes can be built by energy sharing between parts of the city. 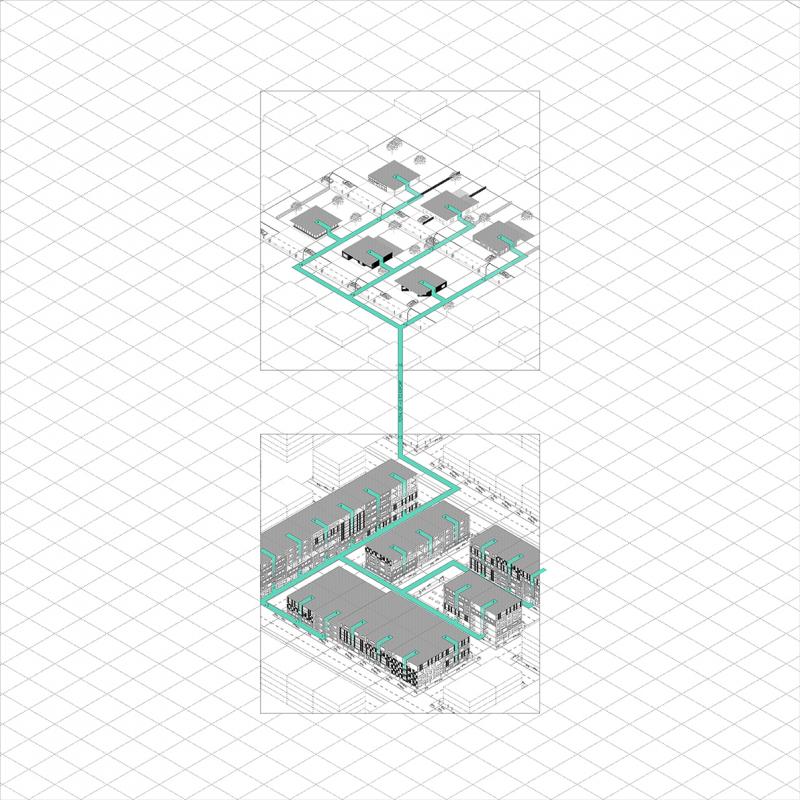 The 3d grid I am proposing is to be understood as the maximum allowable space that can be filled with modules representing different programmes to build up a city. 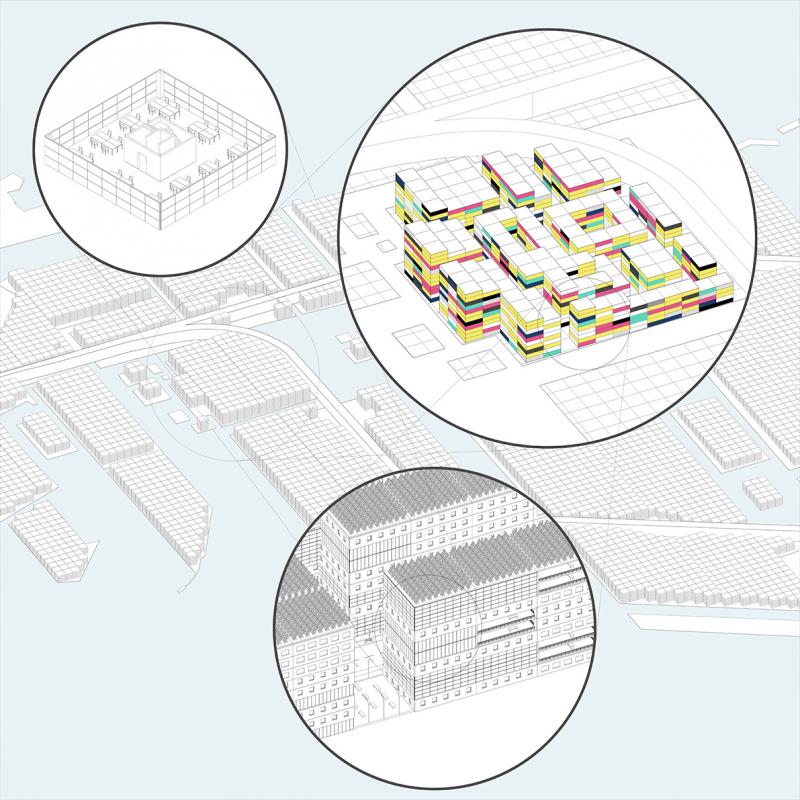 The 3d grid is the skeleton of the proposal, within it, different architects then fill in the final design solutions in stages as it is shown here. The driver of this development is that the project gets built in stages shown in colour. Every next stage is built when the previous one can pay for the next one with the collected energy. 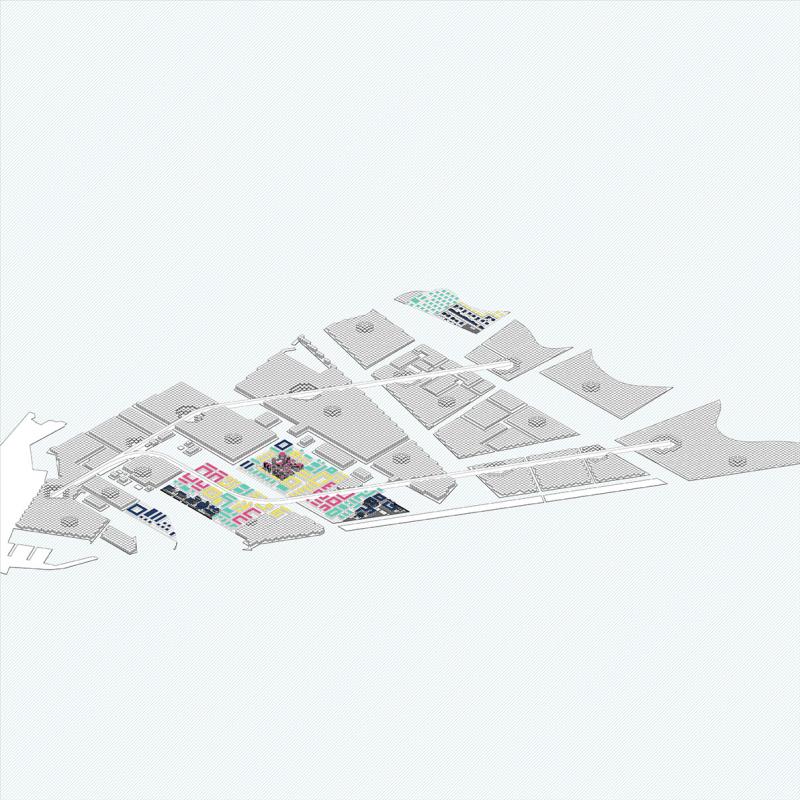 The 3d grid has accents that act as landmarks and depressions that are nodes around the lifeline. These are the points from where the city grows. 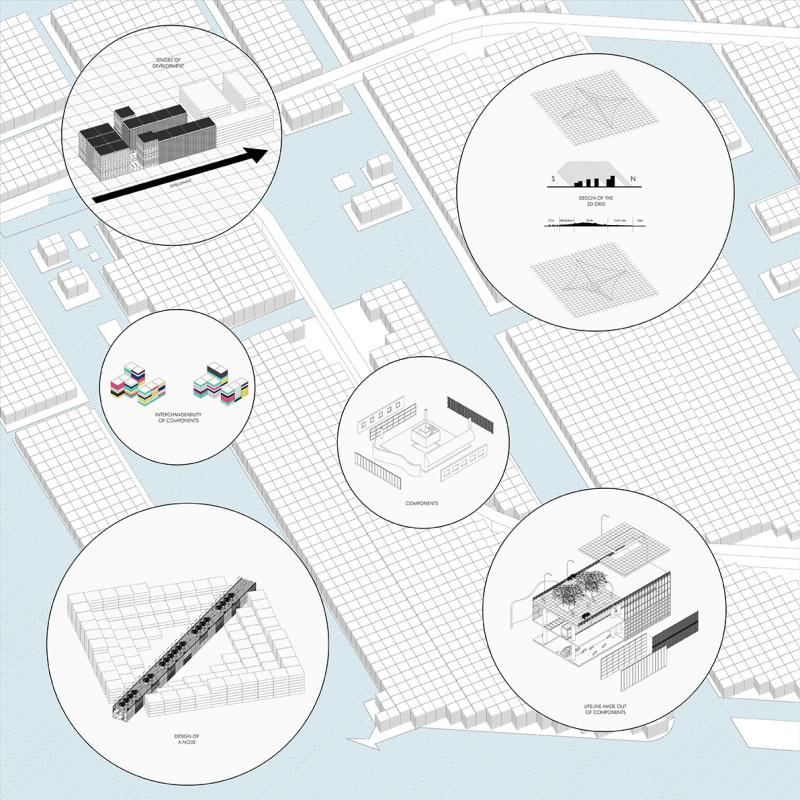 The introduction of the self growing grid system in the project is to be understood as an evolution of the values that architecture has acquired through the centuries, it is a continuation in a new framework so that architecture can break away from the speculative constraints of capitalism, towards reclassifying design values for itself. The idea of the project is a positive utopia in which anything is possible, precisely because of the non-destructible constraints of the overall system that invites interpretation of itself. It is to be seen as a non exhaustive set of building blocks. 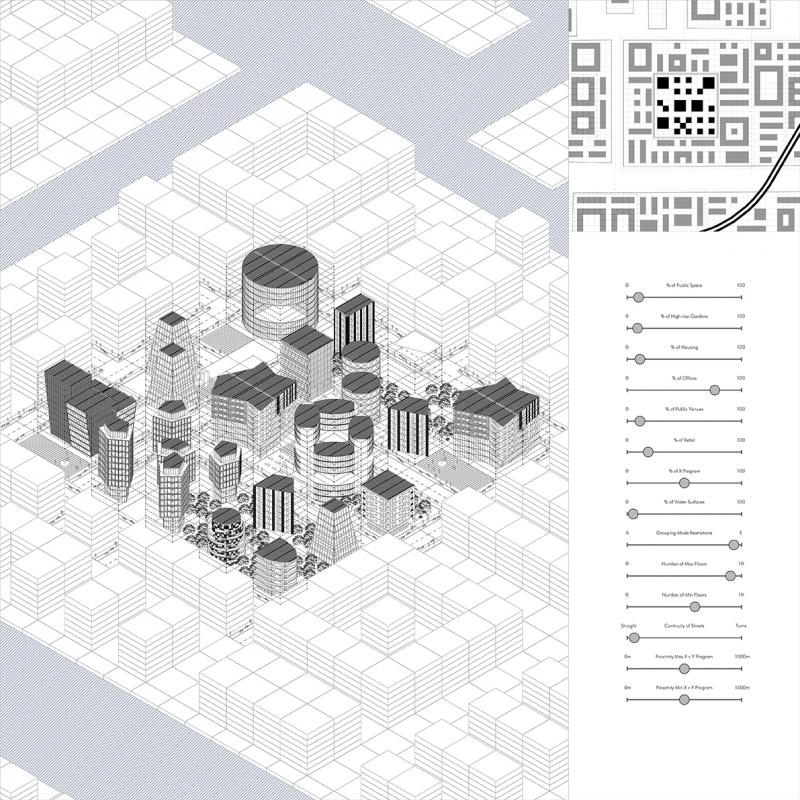 In my project, the priority is a self sustaining, self growing system that is rigid enough to whitstand the welcomed interpretations on what and how exactly should be built within it.
The city samples that I show should are not to be undestood ltterally, but as indicators of the fact that my system allows for any number of different design possibilities. 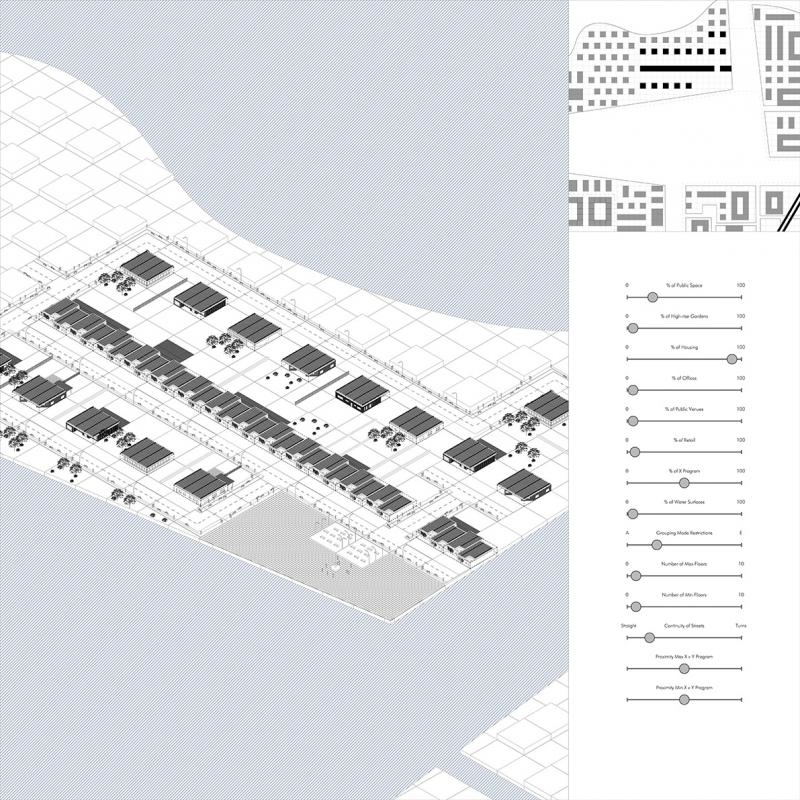 I am not making any sort of judgements on what are the qualities of a built environment beyond the claim that it shuld be self sustaining and self growing.
I claim that the exploration of form is a seperate conversation of secondary importance in comparison to the greater social issues that this project adresses. 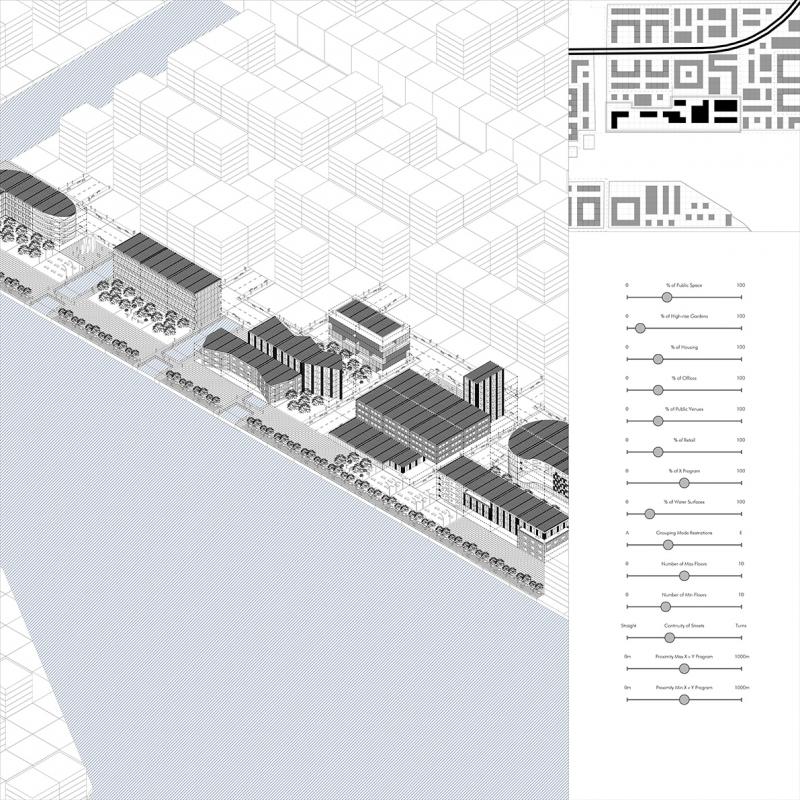 The resolution of the grid exists as a formal entity in the image, but through its absolute rejection of a prefered design, does not exist as architecture. It is an alien presence whose authorship and intent remains completely hidden. 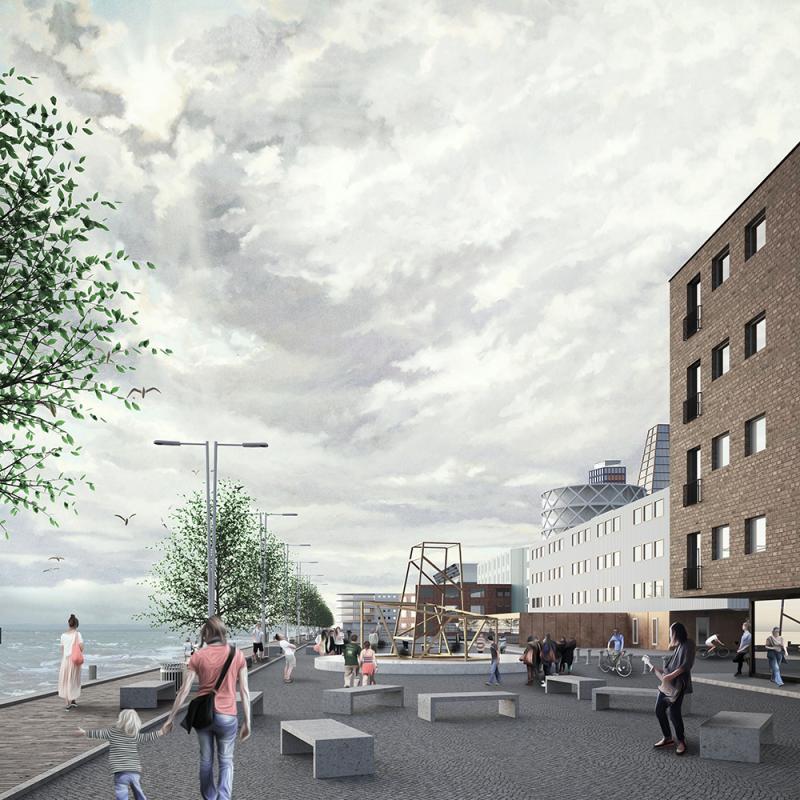